Continuation from the previous 76 parts, the whole series can be found at https://www.nikoport.com/columnstore/

I have written previously about SQL Server Integration Services and their interaction with Columnstore Indexes in Columnstore Indexes – part 51 (“SSIS, DataFlow & Max Buffer Memory”), but for a long time I was looking to revisit the chapter of the communication with SSIS because of one important improvement that we have received in SQL Server 2016 – the better possibility to control the amount of of memory available to the DataFlow buffer.

Summarising the biggest problem of SQL Server 2014 in relation to SSIS & Clustered Columnstore Indexes was the fact that we could not allocate more then 100 MB per dataflow buffer, thus potentially limiting the actual size of the row groups, should 1048576 rows need more than 100 MB of RAM.
In SQL Server 2016 we have an option that allows to auto adjust the size of the data flow buffer, and together with the setting for the default dataflow buffer max rows we can control what we need to make columnstore work.

For the test I am picking up the inevitable free test database ContosoRetailDW from Microsoft, which I will restore from the downloaded backup that was copied into C:\Install folder:

The next step is to create a test table with a Clustered Columnstore Index that resembles the original source table FactOnlineSales, I will call it FactOnlineSales_SSIS:

Once again I have created a simple package with 2 elements in the Control Flow: an Execute SQL Task that will truncate the destination table and a DataFlow Task that has 2 elements – and OleDB Source and a OleDB Destination for transferring data from the original source to the test table: 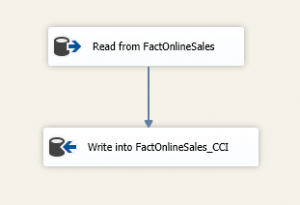 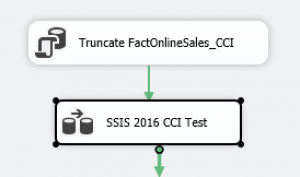 I have configured the OleDB Connection to point at my freshly restored ContosoRetailDW database and I have added a truncation command for the destination table: 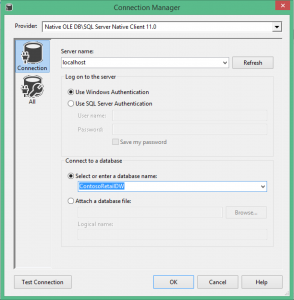 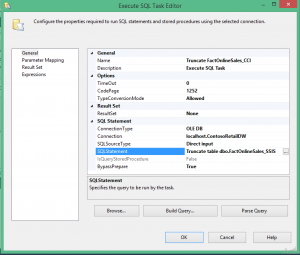 The first test was of course the one with all default settings (coughing carefully … DefaultBufferMaxRows is set to 10000 rows in SSIS 2016)
The default settings execution took nothing less then 5 minutes and 34 seconds on my test VM. For ~12.6 Million Rows that’s a recipe for a total disaster. 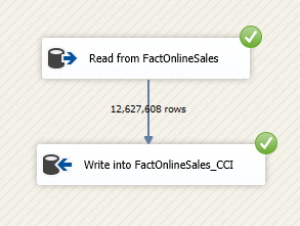 To check on the results I have used the CISL function dbo.cstore_GetRowGroups:

This result shows that we have not received small Row Groups, which would require us to rebuild the table/partition – and these are definitely good news, but the speed is of the operation is something that leaves the desire for further improvements.

I decided not to give up and activated the promised setting of AutoAdjustBufferSize which should automatically adjust the size of the DataFlow up to 2 GB – 1 byte: 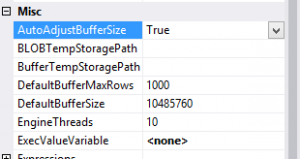 With 4:35 Minutes this result was a rather small improvement. Of course you will need to add at least 15 seconds per each of the Row Groups, so the efficiency of this method is very questionable.

To solve the performance problem I went straight to the DefaultBufferMaxRows setting and set it to be equal of the maximum number of rows in a Row Group – 1048576. Together with the AutoAdjustBufferSize setting it helps the actual current size of the DataFlow Buffer that will be used for transferring the data from the source to the destination table.

What should I say – it worked like magic:
I guess that with 2:09 Minutes the clear winner of this test is the configuration with AutoAdjustBufferSize set to True and the DefaultBufferMaxRows to 1048576. It took less then a half of the time with just AutoAdjustBufferSize activated and the insertion process was executed with the help of the Bulk Load API – meaning that we did not have to wait for the Tuple Mover or to execute it manually. 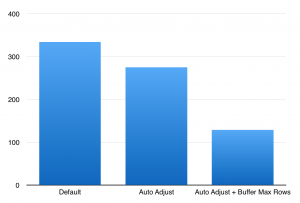 Keep in my mind that any internal pressures such as memory (when you do not have enough to process a Row Group) or the dictionary pressure (this is what you see if you put a lot of very wide strings into your fact table) are something that takes place on the engine level and can’t be controlled from SSIS or T-SQL.

to be continued with Columnstore Indexes – part 78 (“Temporary Objects”)