And here comes the 5th time I am reviewing what happened on the presentation an blogging side of my life, this time focusing on the past year of 2017. Like in the previous years (2016, 2015, for example), I am including the information from the previous years, in order to discover, even for myself, how things have changed in the past 12 months. 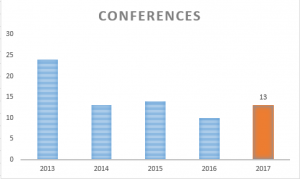 In 2017 I have spoken at 13 different public conferences, making in total 22 presentations, which is meaning that I have made a number of conferences where I had more than 1 session, making almost 2 session per conference on the average. Out of those 22 presentations, there were 2 full-day precons (at SQLBits and at PASS Summit), but I have also made 5 online presentations (the biggest number ever in a year) – which was the goal of my year 2017, to make more sessions online than travelling over. I have delivered presentations in England, USA, Poland (online), Spain, Germany and Portugal. The topic of my presentations were mainly Columnstore Indexes, but I also had some In-Memory, Analysis Services and CosmosDB as well. 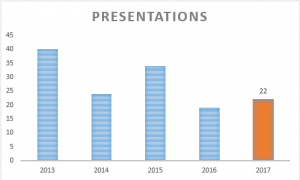 I am very happy that the total number of the presentations went a little bit up, which is meaning that I did a bigger effort and that my 5 online presentations contributed in the way I hoped they would (I am really looking at the statistics only at the end of the year, when nothing can be changed, and so you might feel me being quite happy about it)
I have stepped into the new topics and this will definitely continue in 2018, with the strategy of presenting more on the BI at the local user groups in Portugal. 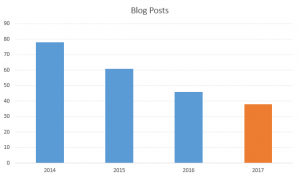 I have stepped off the pedal of blogging in 2017, dropping the overall number of blog posts to 38, from the planned 52+, and compared to the previous years you might notice the decrease of the blog posts of almost 50% – yes in 2014 I have had 78 blog posts, 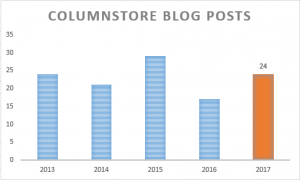 but the good news is that the year 2017 was the second most productive year for my Columnstore Blog Post series with a nice 24 new blog posts, which is one of the targets I had in mind for this year, and for which I will have to strive more in 2018. My list of the ideas and unfinished blogposts is keep on growing, instead of decreasing and challenging me with the new subjects to write on.
There are a lot of smaller technical sides that were not touched before, that after finishing the most burning SQL Server 2016/2017 news, I will focus on those sides, and this should take place somewhere around March/April 2018. 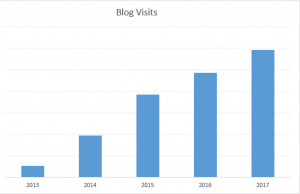 Related to the visits to this very site – I can reveal that there are more than before, with 22% growth which is similar to the previous year 26%. I am guessing that Columnstore Indexes will not become less popular with time, but quite contrary, once people migrate to SQL Server 2016 SP1 and later versions, they will start discovering the power that is hidden within the Columnstore Indexes and their search eventually might bring them to this site and to the blog posts I have been writing for the past 4.5 years. :)
You might ask “How big are those numbers?”, but it does not matter to me, and so let me say that you can imagine them being like 1, 2, 3, 4 & 5 people in total :)

After a lot of delay, I have managed to ship the version 1.5 of the CISL (Columnstore Indexes Scripts Library), adding early support for the Azure SQLDW, more precise search, bug fixes, etc.

I know that I have been lacking updates, but this situation will improve already in January of 2018 with some great stuff that has been built on my private machine … :)

In 2018, I have already a busy schedule planned up with SQLSaturday Vienna in January, SQLKonferenz 2018 in February, MVP Summit in March (there will be no speaking, but listening and feedback, but I do count those days as the conference, because I am away from my family), SQLDay in Poland in May, and also some other conferences in May & June (not confirmed yet), while targeting some South-American trip by the end of the August … :)

I am also definitely looking forward to speak for at least 2 user groups in Germany over the course of 2018, should my travel schedule allow it, so far I have only spoken in Munich for the local user group and I would love to increase this number in 2018.

I am still awaiting some confirmations to reveal the next step of the Tuga IT, but be sure that it won’t be a small one. :)

2 thoughts on “Presentations & Blogging of 2017 in Review”