For the 4th year in a row, I am keeping data on my professional engagements to help the others –
public presentations, blogging efforts & organisations of the events.

In 2016, I have made my best efforts to reduce travelling and to increase the effectiveness of my presentations. On the events organisation side, I have passed the leadership of the both SQLSaturday events to Ivan Campos & André Batista completely – meaning less involvement in the organisational activities, while continuing being a volunteer. This was done in order to concentrate more on the crown jewel of what I was working on – the first Tuga IT event. 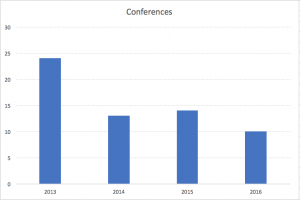 In 2016 I have spoken at 10 different conferences, making 19 presentations & 2 precons that were spread over 12 months and were ranging from online webinars for a couple of enthusiasts to the PASS Summit 2016 – the biggest Microsoft Data Platform event in the world.
Following my goal of spending more time with my family, I have decreased greatly my submissions to the events and even though some incredibly generous organisers even invited my to deliver workshops for their events – I needed to make sure that what truly matters to me (the family) is truly first. On the local level in Portugal I have spoken for SQLPort in Lisbon & Coimbra, and for the Porto.Data I have spoken in the invincible city of Oporto. I have participated in more online conferences and webinars than ever before and this trend might see further increase in 2017. 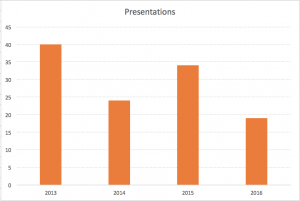 I am very happy & proud of lowering the pure number of the sessions delivered, this was my ultimate goal for the past 2016. I was doing way too many things and focusing on what really matters is important for me.
As I have written 1 year ago in Presentations & Blogging of 2015 in Review – “I hope to arrive to the end of the 2016 being able to say that I was travelling less.” I can now claim that I have achieved my goal. I have spent less time away from home and especially since my professional travel has increased – this allowed me to achieve better equilibrium in the personal life.
Besides traditional SQL Server presentations I have had a number presentations on the technologies that are emerging outside of the traditional space – such as U-SQL, Hadoop, while increasing my focus on the incredible offering of Azure SQL Database.

For 2017 I have already a couple of commitments, such as delivering an online presentation for the Polish User Group & another presentations at the SQLKonferenz & naturally the workshop at SQLBits. My agenda is starting to fill up and I will be pursuing some certain limits on the number of the presentations I will be doing, so that in the begin of 2018 I can see a stable & similar number of presentations and attended conferences. 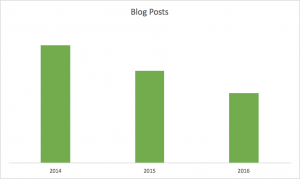 In 2016 I have published 46 new blog posts and while of course this number went down from the 61 blog posts I did in 2015, as you should know – number of activities does not mean the quality. :) I definitively wish I have blogged more, at least 1 blog post per week which I will be targeting for the 2017. 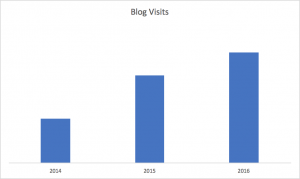 My Columnstore series have grown with just 17 entries in 2016, which compared to the 29 blog posts in 2015 is a significant decrease in productivity, but in 2015 there were 21 making it a comparable number. I feel that the quality of the produced has increased, but the pure number of posts reflects the lack of time for writing since I have an incredibly big list of stuff on the columnstore I want to blog about.
Judging by the growing number of visits that my blog is receiving, the importance of Columnstore is steadily increasing (and with the appearance on the Standard Editions and even Express & Local) the popularity of this indexes will grow in the years to come.
I will be writing more in 2017, that is definitely a serious goal for me.

Open Source
I have release a big number of CISL (The Columnstore Indexes Scripts Library) releases (7 to be precise) with the latest at the moment (1.4.2) made live in the last days of 2016. I have also launched Columnstore.NET which I will be greatly enhancing in the next 2 months.
I have also launched the MOSL (Memory Optimized Scripts Library) which is still in the early preview versions but will be growing vastly in 2017.

For 2017 I will be focusing more the effectiveness of what I do – hence less but higher quality presentations, blog posts & my open source projects.
I am also putting more of my time into Tuga Association – which I expect to start doing a lot of new projects. :)
On the presentation side, I am already submitting some contents, related to the projects I have implemented within the last 6 months at OH22 that include Powershell, Azure Infrastructure and some other stuff, which will revealed in time.
I truly appreciate all the wonderful & generous invitations to take part in the conferences, but in the next couple of years, until my kids are a little bit more grown and I can take them with me – I will be focusing on spending more time at home and doing my part online.