Continuation from the previous 105 parts, the whole series can be found at http://www.nikoport.com/columnstore/.

I always wanted to do a proper comparison between different ways of compressing freshly loaded data into Columnstore Indexes (hey, there are real reasons for that), and after a great discussion at SQLBits with Ola Hallengren & Sunil Agarwal, I was motivated to write a blog post on this matter. Using currently the latest available Cumulative Update (CU 3) for SQL Server 2016 with Service Pack 1, I have decided to restore my standard basic test database ContosoRetailDW and do all the usual stuff for making it perform well on the tests:

I decided to something rather basic and trivial: to create a new table with Clustered Columnstore Index, load 2 million rows into it without using Bulk Load Api (thus making sure we shall have 2 Delta-Stores (1 open and 1 closed) and then compress those Delta-Stores into compressed Row Groups by invoking ALTER INDEX … REORGANIZE and ALTER TABLE … REBUILD commands, while measuring the required resources.

For the setup part, here is the script creating a new table FactOnlineSales_ReIndex with a Clustered Columnstore Index, and loading in a primitive way 20 times the same 100.000 rows, making the total number of rows 2 million within our new table:

As for Virtual Machine for the tests, naturally I am using Azure and for the initial test I decided to use DS2_V2 Standard Virtual Machine, currently having 2 cores and 7GB of RAM.

First, for the test I have run the following command, forcing closure and compression of all Delta-Stores (open or closed ones):

For measuring the memory granted I have used a simple query against the sys.dm_exec_query_memory_grants DMV, in the other window of the Management Studio, while the respective REORGANIZE command was running:

For the 7 GB of RAM that were available for the SQL Server, the operation with ALTER INDEX ... REORGANIZE took acquired around 800 MB, showing a very hungry behaviour, as expected, but my thoughts were - this is nothing special, not even 25% of the available Buffer Pool - as far as I am concerned. What about a complete Rebuild process with ALTER INDEX ... REBUILD command, that one should be definitely more costly!
So once again, I executed the setup script, and this time I ran the following command:

Well, this is getting quite interesting, isn't it ? For rebuilding the table with the same amount of information we have acquired just 511MB, while using essentially the same quantity of memory. You can see on the picture below how big the difference between those 2 methods is, and if you have a brand new table where you load the data, you should have no doubts about the suggested methods for the small VMs using a couple of million rows - the REBUILD performs with the same speed while requiring significantly less memory.

To spare all the Wows & how can's, Microsoft was well aware of this problem and has delivered a solution with Cumulative Update 3 for SQL Server 2016 with Service Pack 1:
FIX: SQL Server 2016 consumes more memory when you reorganize a columnstore index, and here it is - a new trace flag 6404 (documented in the link and thus should be supported), that will allow you to lower the memory requirements for the ALTER INDEX ... REORGANIZE command.
Let's take it for the test, by once again running the setup workload for the FactOnlineSales_Reindex table and then executing the following command, enabling the Trace Flag 6404 and then reorganising our Clustered Columnstore Index:

Sampling the information from the sys.dm_exec_query_memory_grants DMV, will give us the following information:

This time the ALTER INDEX ... REORGANIZE command went to grab just 733MB of memory, which is around 10% less than the original memory request. This is a quite an important improvement, allowing you to have more workloads running at the same time, but judging by the current results - going REBUILD on similar scenarios should be the weapon of choice!

This is quite an interesting discovery, but the real question that you should be asking is how does this scales on bigger Virtual Machines with more memory - and so let us dive into those scenarios! 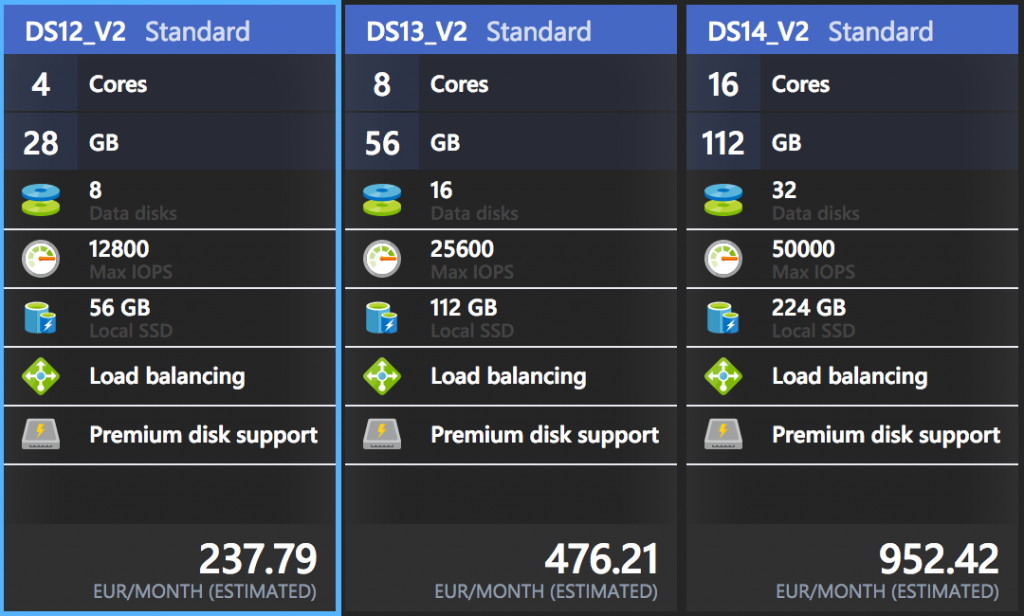 plus I decided to include to include the VM Standard DS11_V2 with 14GB of RAM to have a more complete picture of the development of the memory grants.

After running multiple workloads on those VM for multiple times, I have seen the following numbers that are represented on the graph below:

Essentially the Trace Flag introduces a cap on the acquired amount of memory, with smaller machines with around 16GB of memory being capped on 2GB while bigger ones are simply cut on 4GB.
Think about this trace flag as a switch that you can enable, if your system is suffering under huge memory grants in parallel, and please, do not think about this trace flag as a magic voodoo thing that solves all problem of the universe, because it might bring you some problems as well.

I agree with the Microsoft decision of not making this change to be the default right now, it will definitely shift a lot of things around - should it be enabled by default. Your system will need to do some serious testing, to understand the impact it will bring.
Think about other aspect of this change, if you have a pretty wide table with hundreds of columns & trying to cap the max amount of memory granted for this process will trim your Row Groups (read Columnstore Indexes – part 31 (“Memory Pressure and Row Group Sizes”) for more information), which might not be the thing you are looking to do.

In any case after reading this article I am sure you will understand why ALTER INDEX ... REORGANIZE does not look attractive by default for all cases,
but keep in my mind that it still holds the candle for the Clustered Columnstore Index because while being ONLINE process, a REBUILD is still an offline one (note that for SQL Server 2017 the Nonclustered Columnstore Index can be rebuilt online).

I will call this as a short term fix, because I believe that we need a more flexible algorithm to adapt to the memory requirements, without capping on some certain number (2GB or 4GB) or stealing 25% of the Buffer Pool.
I am excited to see the improvements but I am definitely hoping to see a more adaptive algorithm in the future.

to be continued with Columnstore Indexes – part 107 (“Dictionaries Deeper Dive”)