It goes as far as becoming a buzz word, where everyone declares her/him-selves as mentor for any given task, it is almost ridiculous as the Entrepreneur (especially as in the Serial Entrepreneur – what the heck is this thing anyway? or Digital Disruption).

A truly ridiculous part of such attempts is when someone puts 20 kids versus some 20 random people (who were chosen! to be the mentors) and without looking at their respective qualities will try to assign the mentors or what would be even worse attempt is when someone will suggest that those 40 people should split into the mentor/pupil part on their own. 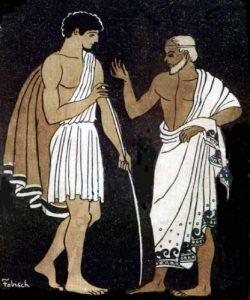 In Greek Mythology, Mentor was the name of the elder who was entrusted with the education of Odysseus’ son Telemachus. He was a friend of Odysseus and judging by his actions he was not the most capable of the caretakers (yes, a big fan of Greek Mythology since childhood is writing here :)), BUT
at the crucial moments, when help was desperately needed, Athena would take Mentor’s form.

This is an extremely beautiful history that through the metaphor explains the role of the mentor – to go & teach beyond his own capabilities, because if Goddess of wisdom is “speaking through you”, this is where you are helping others to grow well beyond your own potential and capacities. In some cultures, people would say that it is one’s Genius being speaking through you – in any case it is the true moment of inspiration.

Mentors Meaning for me

Mentorship was never meant to be a commercial relationship, and while potentially there is nothing preventing one to make money out of her/his knowledge & capacities, I cringe badly at the idea of Mentor abandoning his pupil – it sounds and feels extremely bad to see someone dropping the ball of the responsibility.

Mentorship should have nothing to do with the selfishness and unfortunately in the modern world it looks that “becoming a mentor” is more about the privileges that one gains, instead of focusing on the pupil (Yes, I prefer this world instead of mentee). If the relationship is based on the gains for the mentor, it is not a mentorship and the person is not a mentor. Of course this is a question of a judgement, but I guess in the end we are all capable of distinguishing good from bad and lies from the ones telling the truth.

For me, Mentor has somewhat reached his maximum capacities and it is one of the steps that she/he are doing in order to give something beyond their maximum capacities. Mentor is a kind of a player, who is looking at his finite abilities and plays the infinite game, the game beyond his lifetime, the infinite game.
In a way, you can compare this situation with a true Business Angel, the one who is not primary interested in making money, but the one who is trying to give something valuable back to the society, trying to send down the elevator in a way.

Mentor will suffer with highs and lows and will feel responsibility of the final result, they will carry on their pupils failures as their owns. Mentor will celebrate their pupil’s victories as something extraordinary and will not claim those victories to themselves – their mission is to go beyond their own limitations and self-promotion can never be a goal for a true mentor.
I know people who are doing real mentorship and I have seen them suffering when the results of their protÃ©gÃ©s were inferior to the expectations. This is never a theatrical procedure but this is a true dramatic occasions with no sad pictures on Facebook or Instagram. They take it personally, they do their job to make things work. They are truly dedicated people with their personal goals focusing on helping their protÃ©gÃ©s to grow and to succeed.

The mentors had a lot of different names through the history of humanity – Guru, Rabbi, ProtegÃ© (I especially love this word, because for the Latin Languages it has a huge correlation with a meaning Protected – meaning that the Mentor is carrying the responsibility for taking deep care and protecting her/his pupil) and I guess that their existence is rooted in every culture.

For me, there are different “kinds of mentors”.

I want to mark a very significant distinction between people helping one to grow: the teachers, the coaches and the mentors.
Teacher is a person, who has more knowledge in one or more specific areas and who will be helping you to achieve a concrete goal – such as the typical teachers in the traditional schools. (Please note that I do not diminish the role of the teachers and I do have a great respect for them).
Mentor is a person, who has a superior knowledge in one or more specific areas, and who can bring the pupil not only up to his level, but to the levels beyond his own knowledge. In the practical terms, he won’t teach you which plug to pull to solve the problem you are facing, but also why the problem takes place, what are the advantages of the solution and what are its limitations and how to troubleshoot and how to face the problems in the future.
Mentor is someone is a guide (and he can be pretty much a spiritual guide), who will be accompanying you during the process of mentorship and which is typically not limited for a short interaction, a lot of time it is a life-long process.
Mentor will carry a part of the responsibility for the result of his mentorship. This item is extremely important, because in the modern world of “washing hands”, it is a common and a very bad custom of blaming the pupil and getting rid of the responsibility of someone who should accompany and be the guide of her/his pupils.
An important part of the mentorship for me is the reversal – the situation when pupil will take over the mentorship of the mentor. This is an incredible sign of success for the mentor, as her/his pupil grew well over
Coach – A middle term, currently this one is a largely commercialised concept that occupies the middle ground between a teacher and a Mentor. The original term usage was much closer to the teacher, such as in the sports – but the eventual commercialisation took it to the limit where coaches do not last any significant amount of time to do their job or care more about themselves than about anyone else.

Did I ever mentor someone in my life?
Nope. Seeing how much knowledge I do lack, I won’t be a good light in your search for the truth and/or enlightenment.

There are only 3 people I ever did or do mentor – my kids. This is one of the integral parts of being a father, but otherwise I tend to refuse any of such proposals, for the following reasons:
– I am not qualified and the responsibility is big enough for me to know that I do not have enough knowledge and patience;
– I am not done with my projects – there are so many things I hope to do;
– I have no extra time, as I will prefer to give my time to my family or to my own development;

Have I had a mentor ?
No, but I have had “a kind of heroes” who guided me. Those lessons I had will stay with me forever and so many things I do right now, are still guided by their wise words, even though some of those words were spoken 30 years ago. There were never an officiated relationship, with no posts on Social Media or whatsoever. One can recognise a light when its guiding and when someone faulty in his/her limitations are capable of being a guiding light for ones life.

This “a kind of a Hero” can serve as a guide for many things, but it won’t replace a meaningful mentorship – but hey, I do not think that a lot of us will have true mentors in our lifetimes. A mentor is a blessing and his/her appearance in our life is question of a gift/luck.

The thing is – our life will go on and we can still do amazing things without this gift.