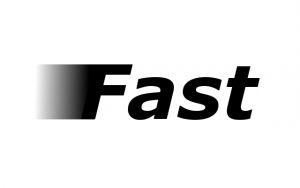 In the human history, there was a huge drive (such an ambiguous meaning here) to get faster.
Maybe within our DNA we have some need for the speed. The one that makes us run faster, eat faster, drive faster, fly faster, compete with each other …
Because we want to show our worth to the tribe – to our competitors for the food, comfort and safety – that we are well worth the very best.
That we deserve that fine food, that nice companion and that sunny & safe place.
And we should always “stronger faster make it better”!

But we are already in the 21st century – and some of that old practices do not make any sense anymore.
We should not behave only like the kids, asking irresponsibly to go faster & faster.

Faster.
Not more precise.
Not more efficient.
Not more surprising.
Not more inspiring.
Not kinder.
But Faster.

After all, who would care for “inspiring and furious”, right ? LOL
But it would be one heck of the film ! Actually, looking around you might easily find some public people who can be described precisely in this way.