Continuation from the previous 111 parts, the whole series can be found at https://www.nikoport.com/columnstore/.

This blogpost is focusing on the Server Object functionality of the SQL Server – the Linked Servers. Almost everybody knows that the Linked Servers are evil (yeah, I know of some exceptions), almost everybody loves to bash them … and still people use them.
First of all because it allows them to stay within their commodity area of knowledge – TSQL, and secondly because it limits number of services to run and service (Yay, SSIS!).
If you look at the elder designed Database Systems (7+ years) or elder Database Engineers or Developers (7+ years) or those who Google Stackoverflow without questioning about the consequences, you will find a good number of LinkedServers. I keep on facing the systems with the LinkedServers, no matter where I go, but lately at a client I have seen something that was different – they are using Clustered Columnstore Indexes with the Linked Servers and encouraged by them to write about the experience this blog post is to focus on some less expected limitations, at least for me. 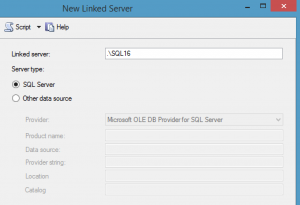 For the start, let us create a simple Linked Server to the SQL Server 2016 Instance, which is a named instance .\SQL16 in my case, as you can see on the screenshot on the left side. I am using a SQL Server 2014 instance on the same virtual machine for this purpose, but I expect the behaviour to be equal in 2005+ versions of SQL Server to be exactly equal. Now we have a connection between our instances that we can use and explore.

Let us start with the reading and joining data from the LinkedServer, the most basic operation one would use the Linked Server for:

Reading data from the LinkedServer

On the linked Instance (SQL Server 2016), let us set up in the database [Test] a simple table T1 with just 1 integer column and a Clustered Columnstore Index:

Now, from the original Server (in my case this is a SQL Server 2014 instance), I will fire a simple query, calculating the total of the values contained within our table

The query runs successfully and the execution plan is rather plain and simple, but it will start hiding important information from you if the Predicate Pushdown took place (yes, it did) or not, but this situation is the very same as for the RowStore Indexes, here are no visible exceptions for the Columnstore Indexes.

Joining the remote table with the local table is also an easy item, which works as expected, and here a basic example with an execution plan:

All other basic operations that I ran against the LinkedServer were successful in the equal measure, and so we should focus on writing some data into the Linked Server, which should be a rather trivial thing, right ?

Lets us make sure everything is fine for data transfer and as we are using our source server (SQL Server 2014) with Linked Server to SQL Server 2016, let us insert a couple of ObjectIds to the T1 table that we have created in the [Test]Â database:

This statement will result in the error message that you can find below, telling us something about Cursors (????):

Again from SQL Server 2014, our original instance, let's try to insert data into the T2 table, which is a Rowstore with a Clustered Index:

This statement was executed successfully without any problem!

So the problem is lying within the Clustered Columnstore Indexes ?

Well ... :) Let's us push it a bit - let's use the Nonclustered Columnstore Index in our destination table:

Analysing the Clustered Columnstore and the Linked Server

Running an Extended Events agains our destination server (SQL Server 2016) has revealed a good number of secrets that I was not really aware of.
This is pure magical unicorns on the steroids kind of stuff...
Let us fire a simple trivial query to insert a single row into the remote table 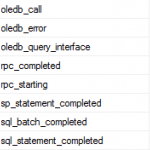 while we monitor the results with a pretty couple of the Extended Events we have got for this purpose. This will give us instantly the basics of the under the hood operations for understanding if there are any cursors involved.

On the picture below, you will see some of the statements that my Extended Events session have caught:

Be sure to recognise the sp_cursoropen procedure, which is responsible for the problem that we are facing.

To prove it, here is a small script that I executed against the [Test] database directly on the SQL Server 2016 instance:

The error message that I have received was very clear, leaving no doubts that Linked Server is not a good friend of the Clustered Columnstore Indexes:

For the test purpose, we cab run a similar script, but against the T2 table (Clustered Rowstore Index with a Nonclustered Columnstore Index):

I guess that no one really cared about the scenario of loading the data into the Clustered Columnstore Index through the Linked Server, but as a matter of a fact - I have faced this situation with a real client. Even though I see the support of the Linked Servers as not the most important missing feature, but still there will be people facing this problem and it might disappoint a number of the real clients.
The lack of support for the Clustered Columnstore Indexes can also serve as a call for action for the future of the Linked Server, where abandoning cursors might be ... a good idea :)