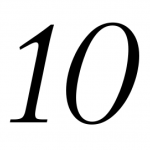 Yesterday, on the 13th of January 2016, my blog has reached it’s 10th anniversary. It all started precisely 10 years ago, when I kicked off with an idea of writing my thoughts and experiments in the area of web design and web standards.
Many things have changed since that time, I have changed job a couple of times (started my own company, worked for Novabase 2 times, PASS and finally at OH22 for over 2 years), I have re-focused back on Data and more specifically on Microsoft Data Platform and there are so many other things that happen as well. :)

Speaking about the blog content, there were 326 blog posts in the past 10 years, making almost 33 blog post per year or almost a blog post every 10 days.
I have had a couple of years where my blog stood very still – in 2009 I did not publish a single blog post, while 2010 had a single blog post (the announcement of the SQLPort launch), the year 2011 had 2 blog post – the short one announcing that was thinking about the future of it and then in December the relaunch of the blog post and the announcement of the first international SQLSaturday – the SQLSaturday #78 Lisbon.
I returned to active blogging in 2012 and 4 years later the blog has never been so active as now, with so many plans for 2016 …

Stay tuned, there are some very exciting times coming … :)