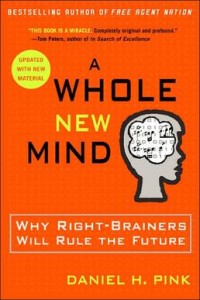 I have dedicated much more time to reading in the past 6 weeks (Since the beginning of December 2014), and as a result I have finished one more book – “A Whole New Mind“, written by Daniel H Pink.

This book was published almost 10 years ago – in a distant 2005, and I have had enough references to it from friends & colleagues in the past years, and I am happy that I have finally sit down and read it.

Arguing that a lot of current professions and tasks will be inevitably replaced by cheaper labour and computers, Daniel Pink is making a very good case for business success – create something that is touching humans on a whole new level, something that is impossible to imitate.

Revealing what he considers to be the 6 principal senses – Design, Story, Symphony, Empathy, Play, Meaning – Daniel Pink explains how they should be applied on the practice and suggests some interesting strategies and literature to follow.

In the past 6 years I can feel that I have known enough local & international business that were very much influenced by this book or the similar thoughts, especially all the focus on the Design Thinking is the element I can point out.

It is interesting that just after 10 years, some of the technologies described in a book in the way that computers will not be able to dominate soon – are considered to be already well in the domain of the machines – face and emotion recognitions for example.

I have felt that a lot of my own thoughts are being reflected in this book. A very possible and logical future for the humanity lies in developing human side and not focusing on the tasks that a machine can eventually learn.

We should all focus on making each other happier people.