Important Disclaimer: Originally, I have decided to write this article the moment I have realised that PASS Summit 2019 would take place during the same week as Microsoft Ignite. That was around one year ago, when the first bits of the unofficial information started to be leaked in the conversations during different Data Platform events.
Nobody has asked me to write this post and in no way I am trying to lower the value of Microsoft Ignite that is absolutely wonderful and extremely important event. I confess that one day I would love to attend it and I would definitely recommend any IT Professional to attend it. So should attend Microsoft Ignite Data Professionals, but not this year.

Given that the selected and non-selected session speakers for Microsoft Ignite were notified apparently in the last couple of days (and naturally, because of my personal opinion, I did not applied this year) I thought that today is the best day to publish this information so that the attendees who are forced to make a choice between the 2 events will make the right choice for themselves and for the future of the Data Platform Community.

I am beyond confident that Microsoft Ignite will be a huge event and it will be extremely popular and incredibly successful, as always. It is not about them that I am writing this post, I am writing about supporting a Not-For-A-Profit organisation which future every year depends largely on the success of the PASS Summit.

I am by far not always agreeing with PASS as an organisation and the C&C as the company who is responsible for making PASS function. The list of the critics I could put here would make it a whole series (haha), but this post is not about me agreeing or disagreeing – it is about Data Platform Community and the importance of the choice.

The thing is – if everyone will chose Microsoft Ignite over PASS Summit, this might potentially destroy PASS as an organisation and this would be a total disaster for everyone in the Data Platform. Even the hardest critics surely do not want to see this happening, I am confident about that.

I know this won’t happen, but I wanted to make sure that if by any chance some decision maker is reading this post, they should be sending their Data Platform employees not to Vegas to the Ignite but to PASS Summit in Seattle.

If there is one single event that changed my whole professional career in the most drastic way, one event that the day I will have to skip attending (and that day will happened sooner or later) – I will definitely feel like I am missing something important, professionally.
My very first PASS Summit was in 2010 and I still remember dozens of tiny details of being there and suddenly feeling being a part of something bigger – feeling being part of the bigger & better community. Connecting, Sharing & Learning. Not only knowledge but even some simple stories over a cup of coffee or over a beer.
I still have stories about some people I know that definitely do not remember me (mainly because they did not know me yet) – Hey Thomas, Louis & Grant! :)
I have made some friends in 2010 that I am still incredibly glad to talk to … Starting with those breakfasts at Daily Grill, Networking event that Andy Warren was organising (and I keep doing my best to attend it again every year). 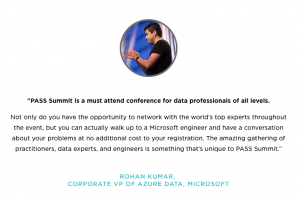 Rohan Kumar (Corporate VP of Data at Microsoft) has so eloquently said “PASS Summit is a must attend conference for data professionals of all levels” and I totally agree. Microsoft sends every single year hundreds (at some point there were around 400 in total) Premier Field Engineers, Specialists, Program Managers & Developers to present on the newest features that they designed or have implemented, and the SQLClinc quality is beyond any piece of doubt – bring your problem and some of the best specialists in the world will help you to find a solution.
Microsoft sends a good number of Data Platform over to Ignite, but be sure – those who are working in Seattle/Redmond are incredibly easier to reach in Seattle at PASS Summit and their presence is relatively easy to arrange for Microsoft. Plus Ignite does not focus only on Data Platform, while PASS Summit is all about Data Platform.

I have my expectations set on the release of the Sql Server 2019 during the week of Ignite and PASS Summit and I am sure that the depth of the upcoming release will be shared mostly at the PASS Summit.
I also happen to believe that most MCM’s and MVP’s most probably will be in Seattle. :)

The thing about Ignite is that it is all about the breadth and not the depth, you won’t be able to find 400 & 500 level sessions at Ignite, since the most attendees are not Data Platform specialists and their focus is on the general implementations. In the modern times I see even a bigger need for the focus and that’s what can be found and learned at the PASS Summit.
If you wanted to talk to me during PASS Summit or have a couple of questions that I might be able to answer – please let me know, as I am already starting to build up my schedule.

I am looking forward to meet so many great friends and make new aquitances during the PASS Summit 2019!