Continuation from the previous 58 parts, the whole series can be found at https://www.nikoport.com/columnstore/.

Aggregation is one of the most common and most useful operation in any analytical processing. Before any significant amount of data can be presented to the user, it needs to be filtered and aggregated, and we all know that the final users will not scroll through pages of the results, but want to have an overview with < 100 rows, that they can potentially drill down in order to discover more details. Aggregation by itself is a process of using some statistical functions such as Min, Max, Avg or similar for processing the rows that are being aggregated. Applying those functions on large amounts of data can take a significant portion of the processing time of analytical query.

In SQL Server 2016 Microsoft has implemented a possibility to push some of the Aggregations right into the storage level, thus greatly improving performance of this type of analytical queries.

It is worth to mention that traditionally Aggregate Pushdown is being described as the operation of attempting to move the Aggregation Operation down through the join operations in the execution plan, with 2 types of situation that were called Eager Aggregation & Lazy Aggregation.

In the case of the Aggregate Pushdown in SQL Server, we are talking about implementing support for the aggregate calculations on the Storage Engine level, thus improving the overall performance of the query through sparing additional work for the CPU. This is the same type of operation that is happening for any other Pushdowns (Columnstore Indexes – part 58 (“String Predicate Pushdown”) &
Clustered Columnstore Indexes – part 49 (“Data Types & Predicate Pushdown”) ) that I have described in the previous blog posts.

At the moment, Microsoft has listed the following aggregate functions that will be receiving Predicate Pushdown support: COUNT, COUNT_BIG, SUM, AVG, MIN & MAX.
Also it is very important to note that it is apparent that SIMD instructions support will be implemented, and so using the latest & greatest CPU processors might bring you an additional advantage.

After good & exciting news, there is always a little space for the current limitations:
only the data types that are occupying 8 bytes of space or less are supported.

Let’s go and test it with a free database ContosoRetailDW, I am running the traditional setup script:

Now, let’s run a couple of tests for aggregate functions on the SQL Server 2016 CTP 2.0 & CTP 2.1 on our test table FactOnlineSales:

If you will execute this query a couple of times, making sure that the table data is already in the memory (Columnstore Object Pool & Buffer Pool respectively), you might see a similar execution times, which are nothing short of impressive, given that our table contains 12.6 Million Rows:

Now, if I execute the same query on a SQL Server instance with SQL Server 2014 SP1,the best result I am getting is here: 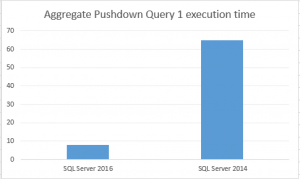 Take a good at the picture with the final results, the difference is really staggering – we are taking almost ~8 times difference in the total execution time. This is really impressive, since the elapsed time on the test query at SQL Server 2016 seems to be not using a lot of resources at all.

Let take a look at the execution plans in different SQL Server versions in order to see the differences:

Looking at the pictures, you will notice that the earlier CTP has provided a different visual representation for the data movement between Columnstore Index Scan and Hash Match iterators were quite different. To be more precise, the thin line in CTP 2.0 was showing 0 (zero) rows flowing from the Columnstore Index Scan, which was definitely wrong, but in the latest CTP 2.1 we can see all rows (~12.6 Million) are being transferred. From the other side there is no visual identification that the Aggregate has been succesfully pushed down into the Columnstore Index scan and this information would be extremely valueable for the performance analysis.

The same query executed on SQL Server 2014 SP1 resulted in the following times: 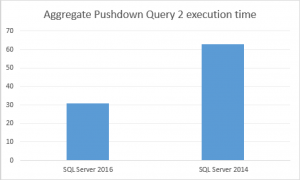 The difference between the systems is still impressive, but at the same time much less significant as for the data type containing just 4 bytes, we are talking here about 2 times in performance improvement.

For the third query, I have deliberately chosen to use an aggregate on the data type that is not officially supported for Aggregate Pushdown in SQL Server 2016 – this was a Nvarchar(20) column. :) 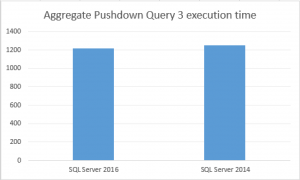 Looking at the picture of the query execution times, you will find yourself searching for any significant difference – with no success at all. Using an unsupported data type (oh those strings … :)), occupying up to 42 bytes (20*2+2) at the area where no improvements have been made …

Ok, that’s fine, but what about the execution plan? Is there something in it that might help us to understand if the Aggregate Pushdown has taken place or not ?

Well, here it is – right now, if you are seeing the Stream Aggregate (Aggregate) operator instead of the Hash Match Aggregate (Partial Aggregate) iterator in your execution plan, this is a good indication that your Aggregate is not being pushed down to the Storage Engine.
Unfortunately at the moment, there is no information whatsoever inside the XML of the execution plan, that would indicate Aggregate Pushdown existence, but there is still enough time to get it in before the RTM. :)

Another interesting issue that I have observed in SQL Server 2016 CTP 2.1 is that introduction of the Group By into T-SQL statements with Aggregate functions makes them quite slow – to my understandings the Aggregate Pushdown is not happening in this case, consider the performance of the slightly modified Test Query 1:

No one would expect that the performance of the above query would go to be that slow: 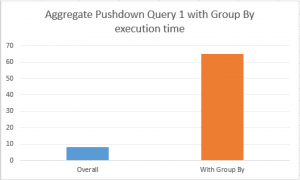 For better understanding take a look at the picture comparing the performance of overall table scan with the similar statement containing Group By part. To me, it seems that the support for Group By statement is simply not implemented so far, and I consider it to be important enough to appear in the RTM of the SQL Server 2016.

Overall a great performance improvement which is definitely going to improve the life of those running analytical query on SQL Server 2016, but there are definitely things to improve in the current beta-version, and this is the reason why it is being called CTP – Community Technology Preview.