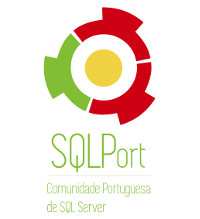 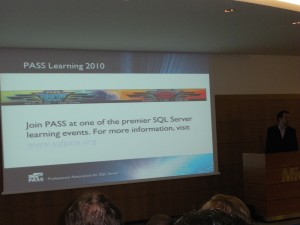 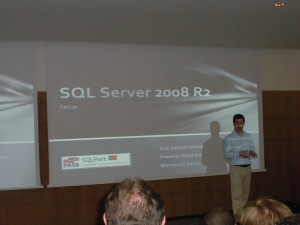 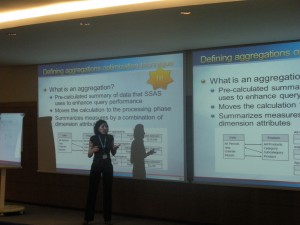 The very first event was done at the old Microsoft Portugal Office, in Tagus Parque in Oeiras municipality at that time. That was a fun time, especially since that Office was quite far away from the city of Lisbon.
With the introduction part being delivered by JoÃ£o Bilhim (at that time Product Marketing Manager at Microsoft Portugal), and sessions by Luis Canastreiro, Yennifer Lopes and myself we have had an amazing event with 30+ attendees who were definitely wondering – what the heck is going on and will this event be a one-time show or will it go on for a couple of months…

We are trying to get a lot of people who were involved in the community creation since the very first day, and who are already not a part of the team anymore – some have immigrated to different countries, some have changed the actuation area, etc. Life happens!
I can’t imagine Portuguese SQL Serve Community community becoming what it is without involvement of the following people – Paulo Borges (being a faithful co-leader since the day 0), LuÃ­s Felix (helping in so many little & big extremely important things, believing in the future of the community, bearing with me for a very long time – which is not easy), Vitor MontalvÃ£o (one of the main helpers, crazy enough to run around with me, promoting SQLPort when it was not a household name), Pedro SimÃµes (for not skipping even 1 meeting for a number of years and eventually becoming SQLPort & TUGA sponsor manager & 150 for sure one of the key essential parts), Paulo Matos (coming onboard on the 1st birthday of SQLPort, he is running SQLSaturday Portugal Workshops, manages SQLSaturday Portugal flow on the day of the event, manages financial part of TUGA activities, plus so much more, including bothering me :)), JoÃ£o Bilhim (believing that somebody coming from nowhere is capable of taking, helping us to kick off and supporting us every step of the way), Rui Ribeiro (our main helpers for SQLSaturdays), BÃ¡rbara Chambel (supporting our ideas and making Novabase support us in the crucial period of moving to Lisbon), Pedro Lopes, Luis Canastreiro, Yennifer Santos, JoÃ£o Loureiro – for providing sessions at the time when we had so few local community speakers, Andy Warren (for believing in me in less than 3 days after meeting me, for trusting that I have a capable team of people that will do the very first international SQLSaturday), and Miguel Vicente & Paulo Mena (for providing support from Microsoft in the last 3 years).

Current SQLPort fellows who move the organisation to bigger and better successes – AndrÃ© Batista (SQLSaturday secret activities:), he truly works undercover now since I refuse to announce what he is working on), Murilo Miranda & Vitor Pombeiro (24 Hours of PASS, Murilo will be leading something special for SQLSaturday Portugal), Quilson Antunes (our strong supporter, responsible for the labs at SQLSaturday Portugal), Bruno Basto & Paulo MendonÃ§a (integral part of TUGA), Rui Quintino (our supporter in Oporto since day 1 of our activities there), Ivan Campos (Porto.Data leader, the community which grew out of SQLPort)