It was a friday night, 29th of June, and with just a number of hours to go until the SQLSaturday #148 it was decided between the speakers & Tiffena that we should get some real chinese food before getting a good-night sleep. 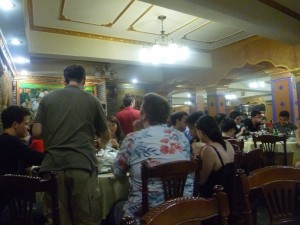 Since Bill Graziano was lucky enough to have his brother with him, who actually works not so far from Shanghai – they decided to take us to a Uyghur ethnic restaurant not so far way from our hotel.
By the time we have arrived there, it was quite full, with a lot of loud music, which was not exactly what we have expected, but as always in such situations – it gives such a great topic for all possible jokes. :) 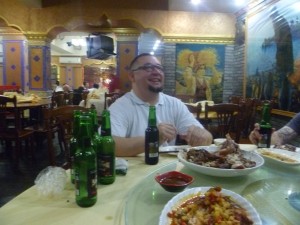 We have spent quite some time during that evening trying to find out who really deserved the nickname #SqlBeer, and judging by some photos, Scott might not escape this “honor”. :) The food was absolutely fantastic and I was delighted to try out different types of food and even eating with my bare hands (while wearing a special glove brought by one of the waiters) was a remarkable adventure.

One thing which started to become noticeable was the amount of the meat consumed by the chinese. I always assumed that a typical cultural thing for the asian cultures were more vegetarian foods, but it seems that in the modern Shanghai this tradition is somehow fading away. 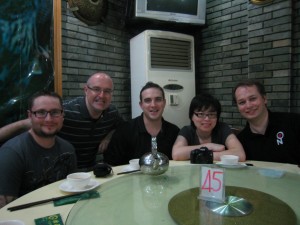 I really enjoyed the company of Tiffena, Bill, Scott, Mark Stacey & Matt Horn – they are incredibly funny and nice people. Without them the event would be very very different, and without any doubt, my memories on the trip to Shanghai would never be so happy as they really are.
I love connecting to different people, and just take a look at the picture – you see 2 south african, 1 american, 1 macau-japanese and 1 portuguese are smiling & shining, and that is exactly how it is really felt.