I am a kind of sorry that I cannot describe the full quality of presentations from the event that we have organized – I was just too busy running around trying to guarantee that everything was right on track. I have attended … well … none … :) Well, besides 2 sessions where I was participating actually … :) One of them was the first session at the Development track, and the other was a lightning talk at the Azure+ track. So today I am going to write about the Development track. :) 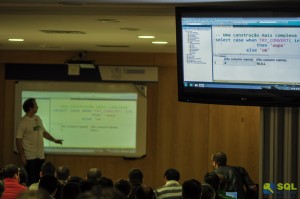 My presentation was the first at the developer track, and it was not because I enjoy being first –Â no! I have decided to put the portuguese speakers first in order to guarantee a couple of things for the event: local speakers should be starting any event, and knowing that a lot of local guys & girls are late for the event, we can carry on our shoulders the fact of having relatively few people in the audience. 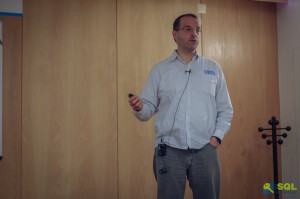 After me it was the time for Hugo Kornelis to carry the flag, and judging by some of the feedback that I have got in the mean time (and even today, hey JosÃ© I am talking about you :p) – it was by all means a very fine and informative session. The Merge functionality which exists in SQL Server since 2008 version still one of the least explored ones, so Hugo’s session was right what was necessary for the developers in Portugal. 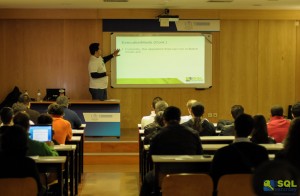 After Hugo, it was time for Pedro Lopes to take over the stage. Pedro is one of the Microsoft PFE’s for SQL Server in Portugal and he is the author of a very fine maintenance solution â€” AdaptiveIndexDefrag which is used by a lot of DBAs. Pedro’s session was about the new additions to the execution plans and though I badly wanted to attend it, I have managed to spare just 10 minutes, when he had some technical difficulties trying to assert the font for a quite small screen that the auditory has had. I think that he had resolved it by the time that I had to leave, so once again I have caught nothing, but I am definitely going to check out the presentation slides and scripts for it as soon as I will get some time. 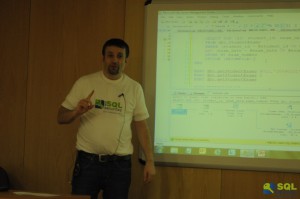 There are not many things that I can add about the sessions after the lunch – Milos Radivojevic was presenting a session on the parameter sniffing and at the same time I was in attendance of the lightning talks where I got a chance to get my extra 5 min of fame. I was told by a couple of people that they wanted to attend the Lightning Talks session but got no chance because the other sessions content was too good to be missed. ;) 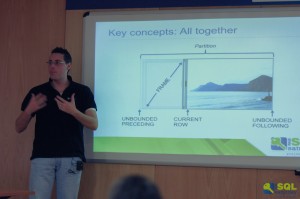 After Milos, it was the time for Enrique CatalÃ¡ to present the new functionalities of the Window Functions in T-SQL. This was definitely one of the session on the top of my list, but as I have written before I have had a different task to do… This is a definitive lesson for all organizers – do not expect to attend any of the sessions of the event that you are organizing. :) 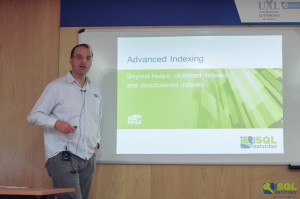 The last session on the developer track was the Advanced Indexing by our friend Hugo Kornelis, and man – I have got a lot of great feedback by a lot of different people. :) I was lucky enough to attend this session before at the SQLSaturday#108 in Redmond, so I really felt glad that my fellow countrymen could enjoy this session.

Well, this post is long for somebody who avoided writing posts for a couple of years, but hey I am coming back to writing this year. Tomorrow there will be a post about the BI track – so do not forget to check it out.