As another year comes to an end (another lap around the sun is complete, yay!), I am looking at the statistics of my engagements for the 6th time. The year 2018 was rich of project & changes for me, I have left my previous job by first taking 6 month of unpaid sabbatical, which then turned into a decision that my future should lead me into a different direction. 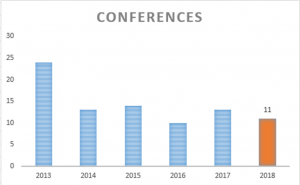 In 2018 I have spoken at 11 different public conferences, making in total 20 presentations, meaning largely that I finished on the level between 2016 and 2017 in the number of conferences and the presentations. Given that I have made a very important cut in the second part of the year gives me an idea that the decision was very correct to my health – otherwise I would be hugely exhausted for no good reason. 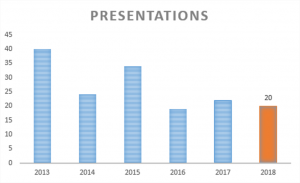 Out of those 20 presentations, there were 2 full-day precons (at SQLKonferenz and at SQLDay in Poland), where just 3 of them were online (need to improve that percentage in 2019!), plus additional 2 keynotes that I am not including in the total this time. I have delivered presentations in Germany, England, USA, Poland, Spain and Portugal. This year I was focusing with my presentations on … surprise! Columnstore Indexes, Graph Databases & Relational Databases. I am hoping and expecting to expand the area of my presentations a little bit widely in 2019.

I have started my first Youtube channel – Columnstore & Batch Execution Mode, the project I was hoping to kick off for almost 2 years, and starting it gave me a huge joy, plus I am very motivated to push it further in 2019. 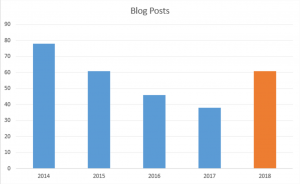 I have vastly improved the frequency of the blogposts in 2018 finishing with 61 blog posts in the past 12 months, corresponding the number of the year 2015, and making huge improvement of around 60% when compared to 2017 (the lease active year since 2012), delivering average frequency well over the planned 52+ (meaning more than 1 post per week). 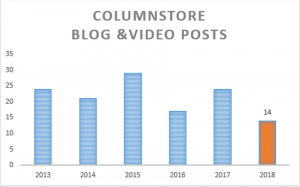 My Columnstore series did not developed that far as I hoped, but I have opened new series for Batch Execution Mode (one can argue it was always a part of Columnstore Indexes previously) and Graph Database both with 3 blog posts per category. Columnstore Indexes series received just 14 blog posts & videos and this is definitely the lowest output so far, but do not take it as a sign that there is nothing to report on, quite contrary ;) And stay tuned for the next 4-5 months, you should not be disappointed. Also I have learned that for such a beginner as I am, producing videos can be quite a time-demanding task. 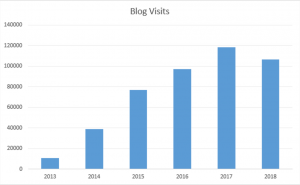 For the first time since 2012 the overall number of visits did not rise but lowered down around 10%, which does not trouble me at all. I guess a lot of people felt that there were not that many interesting things that I wrote about in 2018 as previously, which is totally fine and is a part of the game. I still see the tendency on the rise and expect in a positive light expecting to hit at least the similar results as in 2017 (best year so far) in the next year of 2019. I think people will discover the value of the upcoming SQL Server 2019 and some of my previous blog posts might be shining a little bit differently, plus I am expecting to publish some of the materials I decided to hold on, before the CTP won’t become more stable and those articles might shine some light on some of the gems coming soon … :)

Let’s put it this way – I hope that the 2019 will be hugely better and that I will be able to release a lot of things I have been working on.

What the year 2019 will bring is totally unknown, but I am full of plans. For the first time in many years I do not have a lot of commitment to the conferences – with the wonderful exceptions of the SQLBits at the end of February of 2019. I am flying to MVP Summit in March of 2019, well … and that’s it so far! I am planning to lower the number of trips, but I am very interested in visiting and supporting some of the conferences which are struggling and where I potentially can be of a use.

Tuga IT 2019 and SQLSaturday Lisbon 2019 are in the early planning stages, and there is nothing else to add right now beside that.

There are some other plans, but you will find out about them in due …

Wishing you a wonderful and peaceful 2019!