Continuation from the previous 119 parts, the whole series can be found at http://www.nikoport.com/columnstore/.

A couple of days ago at the SQLKonferenz, during my full-day precon I have recieved a question that I could not answer for sure, because I never tried it out. Empirically I could say that it the mentioned combination would work, but as you know (or should know) – in technology do not expect a technology to work without testing it for your concrete scenario.
This blogpost is about a rather simple and plain test with a technology that gets no love from the SQL Server specialists, nor from the Microsoft – unfortunately. The technology is while old, is still one of the very ways of how you can make multiple servers writing data into the same table in parallel.This blog post is about the Merge Replication and its support for the Columnstore Indexes. I have previously blogged on support for the Transactional Replication with Columnstore Indexes, but this blog post is focusing on the Merge Replication and its interaction and options for the Columnstore Indexes, especially because at the moment of writing of this article, there is no mention of the Columnstore Indexes at the Microsoft Documentation.

If you do not have a lot of knowledge about the Merge Replication, I suggest that you will take a look at the MSDN Documentation and build a test system by at least following the suggested steps.

I have decided to set up a rather simple Merge Replication on the SQL Server 2016 between 2 databases on the same server, where the source shall be my favourite free test database ContosoRetailDW, and the subscriber database will be called Contoso2.

I have selected the FactOnlineSales table to build a Clustered Columnstore Indexes (this is mainly DWH/BI/Reporting scenario considered) with the following code:

Adding this table to the publication will end up with the following, self-explaining error message, being very clear that the Clustered Columnstore Indexes are not supported for the Merge Replication:

There is no surprise here, as the same Clustered Columnstore Indexes are not supported for the Transactional Replication, but I feel that a great opportunity is lost and the Replication technology are being quite ignored by the emerged technologies, such as In-Memory & Columnstore, where the scenarios of replicating the Data Warehousing data is something that a lot of people can find very useful.
I wish it would be otherwise, and this would allow to bring more customers to use Columnstore Indexes.

For the test of the Nonclustered Indexes (Operational Analytics aka Hybrid Transacitonal Analyticsal Processing), I will take an existing FactSales table, and add a filtered Nonclustered Columnstore Index for the first 100 entries (IDs) of the table: 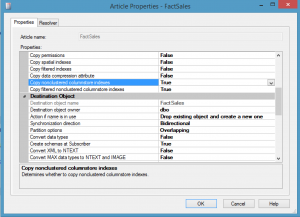 After initialising the Subscriber with the snapshot, let's run the simplest queries against both databases:

Let's check on the Row Groups with the help of the CISL on the publisher (the database ContosoRetailDW):

Let's execute a simple update statement, which will provoke the update over the compressed Row Group, marking the row with id = 1 as inactive through the Deleted Bitmap and shall insert a brand new updated row into a new open Delta Store:

To verify the successful synchronisation, lets run the CISL dbo.cstore_getRowGroupsDetails stored procedure on the both databases to verify the correct execution .

Let's check what is going on with out the Row Groups, let us re-run the dbo.cstore_getRowGroupsDetails stored procedure on the both Publisher and Subscriber:

You can see that we have 99 rows in the Delta-Stores on the both ends, but the only observable difference is that they are not marked as deleted for the Row Groups. This happens because for the Nonclustered Columnstore Indexes we are using Deleted Buffers (2 to be more precise),

You can verify that the Deleted Buffers are affected, by issuing the following query against the sys.internal_partitions DMV:

and on the picture above you will notice that one of the Deleted Buffers (the active one) has already 99 rows marked as deleted.
Running ALTER INDEX ... REORGANIZE (especially with COMPRESS_ALL_ROW_GROUPS = ON) will help to get rid of the Delta-Stores (and even from the open ones), but remember that it won't solve the fragmentation that will take place, once any of the compressed rows shall get updated. To keep so-called Hot Data in the Delta-Stores, preventing from increasing the logical fragmentation (creating obsolete row-versions through the Deleted Bitmap and Deleted Buffers), consider using the COMPRESSION_DELAY as explained in the Columnstore Indexes – part 76 (“Compression Delay”).