Continuation from the previous 59 parts, the whole series can be found at http://www.nikoport.com/columnstore/.

As I have already suspected and discovered in December of 2014, the current Azure offering has offered support for a Single Core Batch Execution Mode support already, and now with upcoming SQL Server 2016, we have an official & public confirmation that Microsoft will be supporting Batch Execution Mode for a single core.
This is one of the major and most long-awaited items on any Columnstore Index specialist list. This means much better predictability of the query execution times on the real servers, that are being suffering with the lack of memory, since as everyone should know, memory pressure lowers the available degree of parallelism.

I took my copy of the free database ContosoRetailDW and executed the following script to restore a fresh copy:

Here are the respective execution plans in the order of the executed queries: 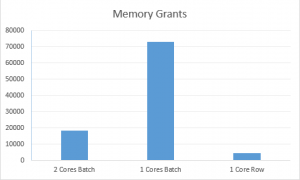 Looking at the results of the Memory Grants, I can’t stop wondering if there are some miscalculations for the Batch Mode involving 1 core. I imagine that right now it is more a kind of a “playing safe” mode, since we are still quite deep into the beta-versions of software, but still we are talking about 4 times bigger memory grant for a query, that uses just 2 times less cores.
I hope the memory consumption will get improved in the further versions of SQL Server 2016 before RTM, I have seen a number of troubles with the Memory Spill’s for a single core, and so I can imagine that higher memory consumption is a kind of safe haven for getting almost guaranteed performance, but we all know that having a lot of big memory-hungry queries leads resource semaphore to suspend them quite fast, which is definitely is an opposite of what we are hoping to achieve.

But let’s take a look at the execution times, and here are my results: 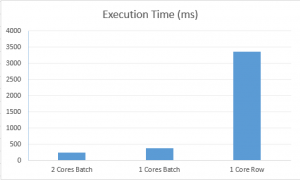 Single Core Batch Execution Mode is a very important improvement for the Columnstore Indexes, especially for the Operational Analytics it will make a huge impact, but there are definitively things to improve before the final release of SQL Server 2016.

Let’s run a simple test query, forcing ordering with the help of the Order By statement: 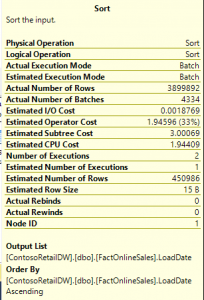 Looking at the execution plan you will notice the presence of the Sort operator in it. And consulting Sort properties will reveal that it was successfully executed in the Batch Execution Mode. This is the way that we are getting such an incredible improvement that in this case in comparison to SQL Server 2014 ~9.5 times improvement brings, as you can see from the results below:

Well, after good news, there are limitations in the current versions, of course…
Should we include a TOP X into our T-SQL statement, where X is below some certain percentage, then we are getting our SORT operator back into the Row Execution Mode.
I can only conclude from my tests that it has to do with TempDB spilling or simply having way too few rows where Batch Mode would not bring any improvement at all (sorting 5 rows for example does not make sense to do in Batch Execution Mode).
Take a look at the following test query:

A very common query for an analytical queries is to have multiple distinct count operations within a single query. In SQL Server 2012 & SQL Server 2014 those types of queries were painfully slow, because of the issues in the implemented execution plan – no one likes to see Eager Spools if they are not truly necessary.

Let’s run the following test query on the SQL Server 2016 CTP 2.1 & on SQL Server 2014 SP1, to see if there is some measurable difference in the actual performance.

Take a look at the results below, I do not think that any additional description here would be necessary. We are talking over 100 times overall improvements with well over 100 times improvement in the spent CPU resources:

Take a look for yourself, the differences in the execution plan are truly impressive (and notice that the 2014 execution plan is not complete, that is just a partial reproduction):

The implementation in SQL Server 2016 is quite simple, simply hashing the received information and determining count of distinct values directly without resorting to expensive temporary storage in order to scan that temporary storage multiple times.
I am confident that a lot of people shall benefit this feature and looking back at SQL Server 2014 & 2012 people will wonder about the reasons that prevented this feature to be implemented right away in SQL Server 2012.
I imagine this simply has to do with the resources and time that the development team has, and the fact that we are getting improved versions of Columnstore Indexes & Batch Execution Mode proves that the problem is not with the capability but with capacity.

Well, that’s perfect, you might say … But are there any gotchas ?
Sure thing, just run this query, which does not contain any GROUP BY at all:

I hope you will got a cup of coffee before running that query, here is the execution plan for it, take a look at it to see if you notice something strange and compare it with the original Multiple Distinct Count in SQL Server 2016:

Let me assure you that Microsoft knows about this missing functionality and I really hope that they will fix it before RTM.

Overall some great improvements for the Batch Execution Mode, with some very useful improvements but also some important bugs to fix.
From my point of view, there are no reasons to stress about the bugs, since this test is still based on a very early preview version of the software.

In the next blog post I will focus on another important Batch Mode improvement, that definitely deserves its own space. :)

to be continued with Columnstore Indexes – part 61 (“Window aggregate functions”)