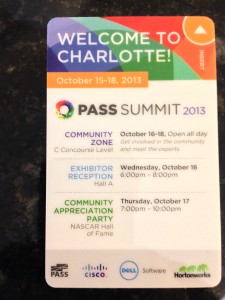 The anual PASS Summit, which is the best SQL Server event in the galaxy was held between 14th and 18th of October, in Charlotte, North Carolina.
This year the biggest difference was definitely in the location, since for the first time in a good number of years the Summit was not held in Seattle but in a new, quite different place.

I wanted to share my thoughts on it:
Call me biased, and since I am still a part of PASS HQ until the 25th of October of 2013 – you can do it, but I loved it. Ever since I have started attending PASS Summit I felt being a part of the #SQLFamily, felt being welcomed into our global society. For me, there is no other community like SQL Server community. That does not mean that there are no problems or misunderstandings – they happen in every family, but there is a sense of a common goal and common love and enjoyment of working in a ever-developing & evolving world of data, and this is something that I have not seen in other communities so far.

I am definitely seeing a number of critical points in holding Summit outside of the Seattle, such as:
– Microsoft support (for Charlotte, Microsoft simply could not send the same number of people like they do for Seattle. Some Microsoft employees were available for contacts at the end of the day, or even during the days sometimes, which naturally could not happen for a city far far away.)
– Vendors support (A lot of companies were created near Redmond to rely on the Microsoft ecosystem and connections, and a lot of them do not have any interest or offices in Charlotte, and so their support & presence were definitely absent).
– International attendees support (Charlotte is not much easier to access then Seattle. I have no actual data of the number of flight connections to the major international cities outside of US, but at least when I was looking for the tickets to Charlotte – this was a much more difficult adventure then the one to Seattle. Needless to say that I have finished buying plane tickets with 2 stops.)

but after all I also believe that doing every now and then Summit outside of Seattle is good, because it will make us all appreciate better the things that we are loving, and because it will definitely engage different new people. 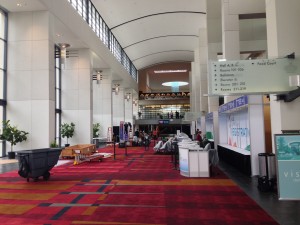 Being part of the PASS HQ, I had to be at the location a little bit earlier since we started holding our preparations meetings on Sunday morning.
Unfortunately all my week was cut in a very bad way by a food poisoning that I have managed to get somewhere in between. I personally blame the airplane & airport food as well as myself for being stupid enough to eat it. :)
From Monday morning I had to cut every activity because I simply was not able to do anything. :( I was unable to attend any activities on Monday afternoon or evening as well as I had to miss the important Virtual Chapter Leader as well as SQLSaturday meetings on Tuesday morning. I have managed to appear on the Regional Mentor meetings and keep myself half-alive on the Chapter Leader meetings, but according to a good number of people – I was looking quite green almost falling apart. 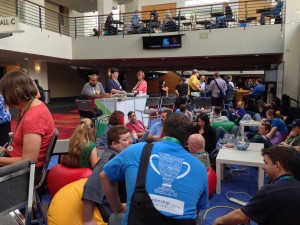 I have spent whole 3 days (Wednesday, Thursday & Friday) at the Community Zone with Karla Landrum and whole bunch of volunteers, running around and trying to interconnect different PASS Volunteers. It is a pure blessing of having so many great volunteers who makes PASS what it is – community. PASS is enjoying the greatest support that any organization could desire and Community Zone would never been the same without volunteers who spent hours talking to a lot of different people about Chapters (criação e apoio), Virtual Chapters, SQLSaturdays, etc. I would definitely point to Tom Norman as the most active volunteer I have seen in the Community Zone. Like at Business Analytics Conference in Chicago, Tom simply went outside of the Community Zone, starting to greet people walking by and pitching them the current topics of PASS, such as Virtual Chapters. He has engaged a number of people who would most probably never come on their own to the Community Zone, and he did it in a very classy way that it keeps on amazing me.

I love engaging with community people and I expect to do it no matter what. I will keep on volunteering with PASS and I hope to make it to the summit next year, so I will be able to stand near to all the amazing volunteers that our global community is enjoying.

Already looking forward to PASS Summit 2014 back in Seattle! ;)