Continuation from the previous 17 parts, starting from http://www.nikoport.com/2013/07/05/clustered-columnstore-indexes-part-1-intro/

This time lets see which improvements were delivered for the Batch Mode processing for the SQL Server 2014 CTP1. Batch Mode query execution was introduced in SQL Server 2012 specifically for the Columnstore Indexes. One of its differences to the traditional Row Mode is that it is processing data joined together in chunks of 1000 units instead of traditional 1 by 1, thus guaranteeing more CPU efficiency for the big amounts of data. Since Columnstore Indexes are being used specifically for the tables with a lot of millions of rows, this is exactly where the Batch Mode is shining.

In the SQL Server 2012 the batch mode implementation was very limited, with just a couple of Query Execution operators being supporting Batch Mode, and in order to get it activated one would have to completely rewrite the query, following the suggestion published by Microsoft.
Well SQL Server 2014 CTP1 is a very different beast. For real. Grab your cup of coffee, jump in – we are going for a very serious ride in the Batch Mode execution country ;)

For SQL Server 2012, lets create a traditional clustered index, as well as the Nonclustered Columnstore Index:

Now let’s try to see how to we can get hold of a Batch Mode in SQL Server 2012, lets execute the following script, which actually is pretending to get the same results (total sum of the discounts) but in 2 different ways: 1st by writing a traditional query, and then following Microsoft’s suggestion to invoke the Batch Execution Mode by creating a CTE with group by and then summing the totals out of it:

Here are the actual execution plans for both of those queries: 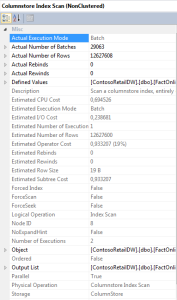 I have decided to discover the behavior of those plans in the terms of the IO, and so I executed the following script before re-executing the previous script:

Here are the results that I have received, which show that in the terms of the IO the difference between the both queries is nothing more than 5%:

Yes, you are looking at the correct plan – a simple & direct query is using Batch Mode even with the Nonclustered Columnstore Index ! The difference between execution plans in SQL Server 2012 & in SQL Server 2014 is that Steam Aggregate from 2012 became Hash Match (Partial Aggregate) in 2014 and that both operations (Index Scan & Steam Aggregate) are running fully in Batch Mode. Here you have the screenshot of the “Statistics IO”:

I do not know why the number of reads is so significantly higher, since the difference between the sizes of the Columnstore Indexes were around 15 MB and it does not represent even 10% of the total space occupied by the Nonclustered Columnstore Index in that case.

It seems that the implementation of the Batch Mode in SQL Server 2014 was taken on a whole new level – on the level of what people like me are expecting from a good 1.0 version. :)
Goodbye query-rewritings – hello operational execution of “normal” queries. I am sure that there are thousands of bugs, and that there will be posts all over internet crying and blaming everyone, but for the moment let us celebrate that even query like this are running in a batch mode finally:

Take it from here – such improvements right in the CTP1 version of SQL Server: this is amazing! :)

The last thing I was looking to measure is if this queries were really supported for the Clustered Columnstore Indexes and so I ran the following script:

Then I ran the SELECT queries again and the execution plan was pretty much the same as for the NonClustered Columnstore Indexes, though the difference in performance were more visible – the first query got better results than the CTE one, though they are definitely not in orders of magnitude, but around 5-8% on my VMs’.

Wait, but then I took a more detailed look at the results and decided to hold my horses a little bit, take a look at the execution plan:

and now at the “Statistics IO”: