This is the fifth part of the series from my experience with organizing the SQLSaturday #115 Portugal 2012. This post is about the Database Administration track.

In my opinion, there should never be any SQL Server event without some content for the DBA’s, because noone wants to get angry the guys, who are responsible for business running smoothly. :) We decided to dedicate an entire track to the topic of Database Administration. Let me say that we have had a very strong presenters on this track – a Microsoft CSS, a Microsoft PFE, 2 world known british specialists, one of the most well-known local SQL Server trainers and one more international SQL Server specialist from Austria. Their respective names are: João Loureiro, Luis Canastreiro, Neil Hambly, Mark Broadbent, Bruno Basto, Klaus Aschenbreenner. 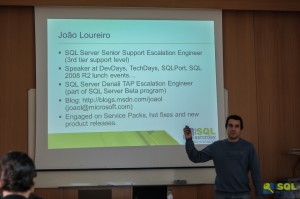 We started out very strongly on the DBA track by putting a fearless member of Microsoft Support Escalation team (3rd line), and an extremely nice guy — João Loureiro. He is a very good specialist and is well known in different places – one month ago I have had a conversation with a SQL Server MVP from a european country who told me that he already had a chance to talk to João (while on the support line), and that he was definitely a great specialist with a very deep knowledge on the matters of SQL Server. At SQLSaturday 115, João was presenting one of the most important if not _the_ most important enhancement of SQL Server 2012 – AlwaysOn. At SQLPort we have had a great pleasure of assisting this presentation of his a couple of month ago, and it was definitely a blast! ;)
I confess that during my presentation I tried to convince a DBA who was in the public to go to João session, because it was so good. 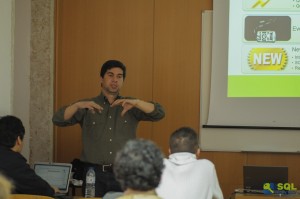 Continuing the line of the Microsoft presenters, the next person at the DBA track was a Senior Microsoft PFE — Luís Canastreiro, who brought some light on the Extended Events in SQL Server 2012. This is such an important topic for everyone in the SQL Server universe, especially because the Profiler is depricated and with a new GUI, the Extended Events are finally in the state of catching the general public attention. Luís Canastreiro is quite a reknown presenter – I have seen him a number of times presenting at SQLPort and Microsoft events, and I just pity myself for not being able to find a time to attend his session. Actually I also pity every single DBA who was not there to attend his session :) haha 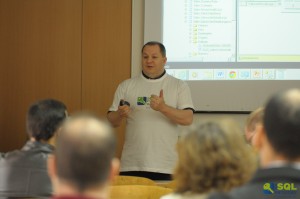 How can anyone from the organization team imagine the SQLSaturday#115 without the “weather mascots” aka “compression man” aka “sqlsnooker”, one and only – Neil Hambly? This guy works like a locomotive, and having him at our event was a great great honor and pleasure. Neil’s presentation subject was the compression, so when I have entered the room a couple of minutes before his presentation, I felt that the people started flocking into it. Unfortunately, so far noone of the people I know have pronounced to me personally the details of his presentation, but I am confident that there were no disappointed people in the room. 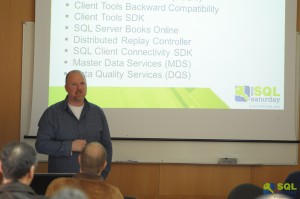 Mark Broadbent had the right to bring the “dragon” into the presentation room, and I am sure that he did. :) We were absolutely delighted when he submitted a couple of his sessions for our event, and judging by the feedback that I have got in first person – his session was a very well delivered, professional material of the highest quality. ;)
On a personal note, I just want to add that it was a great experience for me to meet and to get to know Mark – he is an extremely nice guy. 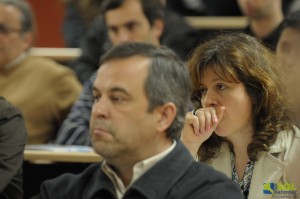 Bruno Basto took over the stage right after Mark has left it, and I am sure that for each and every person who has been to TechDays or other Microsoft SQL Server related events in Portugal in the last ~10 years should have had a lot of opportunities to attend one of his session. Being one of the most senior trainers in Portugal he has definitely left his mark on the progress of the local SQL Server community. His session was focused on the internals of the SQL Server and I assume that the experience of those who attended his session was very positive. 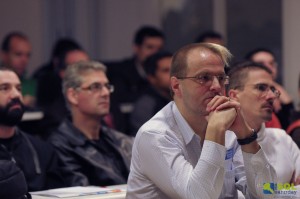 The last presenter of the DBA track was a guy, who has travelled across the europe on Saturday morning, in order to present at our event, and his name is Klaus Aschenbrenner. His session was very important and for me it is definitely one of the top-3 best new features in SQL Server 2012 – the ColumnStore Indexes. This new type of indexes promises some very dramatic improvements especially for the DataWareHouse scenarios. The portuguese SQL Server community should be very grateful for him to dedicate so much of his effort into sharing his knowledge with the rest of the SQL Server professionals.

And if you think that this is the last post in the series on SQLSaturday #115, then next week I shall prove that you are wrong: a lot more stuff is coming up. :)